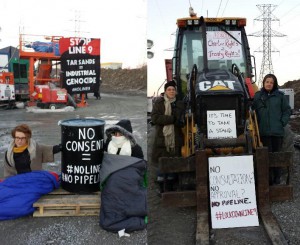 At 6am on Dec 2, 2013, members of Rising Tide Toronto successfully shut down construction for Enbridge’s Line 9 pipeline in North Toronto. Five people, including two priests, locked down to equipment to prevent further work on this project. Approximately 40 workers were sent home for the day and activists continue to occupy the construction site.

“Activists Shut Down a Line 9 Construction Site in Toronto” By Michael Toledano  http://www.vice.com/en_ca/read/activists-shut-down-a-line-9-construction-site-in-toronto

National Energy Board Hearings and Disruption

After three days of uneventful bureaucratic protocol, the National Energy Board hearings for Enbridge’s Line 9 pipeline reversal erupted into a noisy but non-violent demonstration, as protesters in solidarity with Idle No More, and the now infamous Elsipogtog anti-fracking blockade, packed into the hearings and burst into chants, song, and dance, during Amanda Lickers intervention for Rising Tide Toronto. 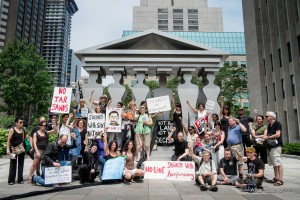 Twelve cities across Canada, including Toronto, participated in solidarity actions June 25 in support of activists who took over a pumping station north of Hamilton, Ontario last Thursday morning. Rising Tide Toronto organized the “Swamp the Courts” action in response to the activists at Swamp Line 9 receiving a court injunction against their occupation. photo: Allan.Lissner.net